To have a better understanding of the submodularity of both set-functions and continuous-functions, let us first of all give a generic view on the submodular functions.

The domain of a “generic” submodular function $f: \cal X\rightarrow \mathbb R$ is the Cartesian product of subsets of $\mathbb{R}$: $\cal X = \prod_{i=1}^n \cal X_i$, each $\cal X_i$ is a compact subset of $\mathbb R$. It is clear that one can define a lattice over $\cal X$ by taking the “join” operation $\vee$ as coordinate-wise maximum, and the “meet” operation $\wedge$ as coordinate-wise minimum, respectively.

By considering different realizations of $\cal X_i$, we can recover different submodular functions:

The submodularity of all of them can be defined as:

It is well-known that for set-functions, submodularity is equivalent to the diminishing returns (DR) property. However, this does not hold when generalized to generic functions defined over $\cal X$:

One immediate observation is that $\nabla f(a)\geq \nabla f(b)$ (if $f$ is differentiable), so the gradient of a differentiable DR-submodualr function is an antitone mapping.

Both submodular and DR-submodular functions are prevalent in real-world applications. So far there are naturally three questions:

Q1. For generic functions defined over $\cal X$, submodularity $\neq$ DR, what is the connection between them?

Q2. For the submodularity of generic functions defined over $\cal X$, is there an equivalent diminishing-returns-style property to characterize it?

Q3. What we can say regarding optimizing submodular and DR-submodular continuous-functions?

These questions will be answered in the following.

First of all, we give a positive answer to question Q2 by proposing the weak DR property: 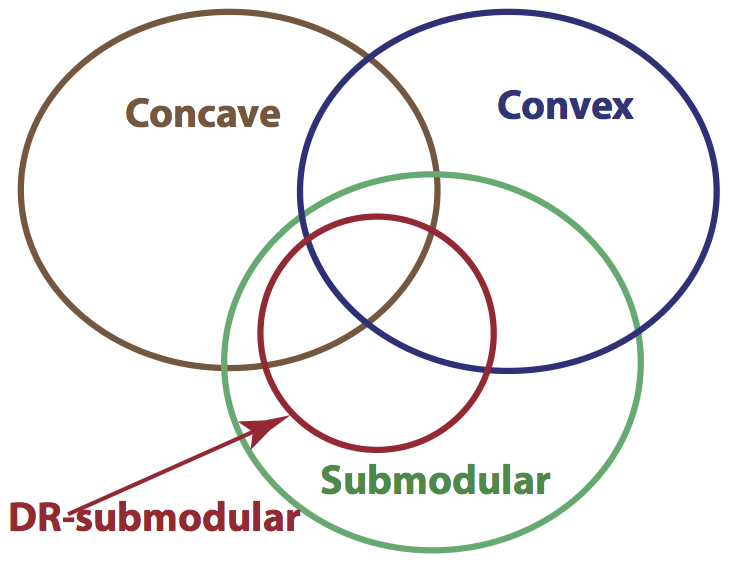 The class of submodular continuous-functions contains a subset of both convex and concave functions, see the left figure for an illustration. For detailed examples, one can refer to the corresponding sections in the above the two papers.

What we can say about optimizing submodular continuous-functions so far?

Here I just summarize the current results on minimizing and maximizing submodular continuous-functions from the above two papers. It is noteworthy that there are plenty of open problems in this new area.

Continuous submodularity is a very general structure in the non-convex realm. The characterizations, especially the second order properties, give a very convenient way to recognize a submodular/DR-submodular objective in real-world applications. So in terms of new applications, I think there are much more non-convex objectives waiting to be discovered, like what happened for the submodular set-functions.

In terms of theory, there are lots of interesting open problems. To name a few:

Hopefully you will find out that the non-convex problem you are working on turns out to be a submodular/DR-submodular one!